Harnessing the faith community to drive impact through empathy.

Global Freedom Network is the faith-based arm of Walk Free, an international human rights group working to eradicate modern slavery in all its forms.

We recognise that faith can play a vital role in fighting modern slavery because faith leaders are in a unique position to see into the hearts of their communities.

Modern slavery is an umbrella term which includes human trafficking, domestic servitude, the worst forms of child labour and forced and child marriage.

With a philosophy built on interfaith collaboration, GFN is grateful to the faith leaders who have come together to tackle modern slavery — an issue which strikes at the heart of human dignity.

GFN was founded in 2014, with the signing of the Joint Declaration of Religious Leaders Against Modern Slavery at the Vatican, a world-first event which brought together leaders of many of the world’s biggest faiths in a common cause.

Since then, GFN has expanded around the globe, working with faith leaders who are building bridges between victims and law enforcement, cooperative connections with governments, social workers and victim support groups, especially in countries of strong faith and high prevalence of modern slavery.

We empower faith leaders to work in collaboration with government, business, and civil sectors to fight modern slavery.

By building relationships and collaborating with faith leaders and faith-based organisations we believe we can increase awareness, understanding, impact, and action.

We are grateful to faith communities and their leaders for their generous support of our joint efforts to protect human rights and strengthen communities.

Eleven signings of the Joint Declaration of Religious Leaders Against Modern Slavery over eight years, on five continents across the world.

The Joint Declaration of Religious Leaders Against Modern Slavery is a landmark document which demonstrates the commitment by faith and spiritual leaders from the world’s biggest religions to the common cause to eradicate modern slavery in all its forms.

The inaugural signing was in 2014, in a world-first event at Casina Pio IV in Vatican City, coordinated and initiated by the Global Freedom Network.

The event was historic not only for its definitive commitment to work across religions to eradicate modern slavery, but also because it was possibly the first time ever that these faith leaders had met as a group, unified in a common cause, signing their names on the same document.

Furthermore, it was a rare joint initiative between Sunni and Shia Muslim leaders. They were joined by leaders from many countries of the world, representing the business, political and civil sectors.

The event included the powerful voice of survivors whose lived experience provides crucial guidance and expertise to the Global Freedom Network.

The declaration is contained in a leather-bound book which has now been signed by 110 faith leaders representing their faiths and religious orders.

Global leaders from the Christian, Catholic, Anglican and Orthodox religions, as well as Buddhist, Hindu, Jewish and Muslim faiths signed the Joint Declaration of Religious Leaders Against Modern Slavery at Casina Pio IV in Vatican City. This world-first event marked the beginning of the Global Freedom Network.

Eight Indian religious and spiritual leaders signed from the Hindu, Muslim, Sikh, Christian, Jain, Baha’i and Jewish religions — representing more than 95 per cent of the Indian population — signed the declaration. Religious leaders and modern slavery experts discussed the eradication of bonded and forced labour in India.

In Buenos Aires, ten religious leaders from the major faiths in Argentina, including the Catholic Church, the Armenian Orthodox Church, the Greek Orthodox Church, the Anglican Church, the Evangelical faith, the Sephardic and Ashkenazi Jewish communities, the Sikh Dharma Community and the Argentinean Islamic Community, came together alongside the national government to pledge their opposition to modern slavery.

A historic event was held in Medellin, Colombia, where eight religious leaders signed the declaration at a GFN event organised in collaboration with the Consejo Episcopal Latinoamericano (CELAM). The religious leaders united to commit to eradicating modern slavery through spiritual and practical actions.

HRH Queen Nanasipau’u of Tonga, together with senior church leaders from 12 Pacific islands gathered in Auckland to sign the declaration and mark the launching of the Pacific Freedom Network. The event occurred alongside the Pacific Conference of Churches’ General Assembly, a gathering of leaders and key representatives from across the Pacific.

A coalition of 14 faith leaders from many of the world’s biggest religions united for the first African signing of the declaration. The location, in the Ghanaian capital Accra, was poignant because it was the site of such inhumanity during the Transatlantic slave trade hundreds of years earlier. The event was attended by religious leaders from Ghana, Democratic Republic of Congo, Cote d’Ivoire and Nigeria, as well as government and law enforcement officials.

The Faith For Freedom smartphone app was launched, bringing a modern tool against an age-old problem. The app, which was developed in consultation with a special faith leaders advisory panel, gives faith leaders and their staff invaluable advice on how to identify, respond to and prevent modern slavery within their congregations.

We collaborated with University of Notre Dame Australia who created curriculum on modern slavery for their students. The Graduate Diploma and Certificate on Modern Slavery and Human Trafficking is based on the belief that every student should learn about human rights and modern slavery and be empowered to put an end to the exploitation of vulnerable people.

Her Excellency Ambassador Chiara Porro, Australia’s representative to the Holy See, hosted a special Global Freedom Network event with diplomatic representatives to the Vatican from around the world. This event fostered an understanding of modern slavery and the global challenge that we face in combatting it, and generated valuable discussion about how we can cooperate to bring international influence to bear in the fight against this abuse of human rights.

GFN partnered with The Pontifical Gregorian University in Rome for a special two-day conference on the role of religion in eradicating modern slavery. This partnership examined international and local perspectives and practices and brought together leading academics, faith leaders and civil society members to discuss modern slavery and how religious groups can help prevent it.

In a landmark event with the Inter Religious Council of Kenya, faith leaders came together to agree to do what was in their power to fight modern slavery in their country. The ICRK’s tradition of interfaith cooperation was hailed as a model for tackling such tough problems which affect communities stricken by inequality and poverty. The gathering heard that faith leaders were uniquely suited for the battle against modern slavery.

Faith leaders from the Democratic Republic of Congo gathered in Kinshasa where they committed to fighting modern slavery in their country. It was acknowledged that extreme challenges faced many DRC citizens who may feel like submitting to extreme exploitation such as modern slavery was their only option. However, the positive and powerful influence of faith and faith leaders was a vital force that could protect congregations from modern slavery, especially with support and cooperation.

South African religious leaders gathered at Constitution Hill in Johannesburg — the site of the imprisonment of many human rights activists and now the location of the country’s Constitutional Court. They endorsed the declaration in a ceremony where it was acknowledged that poverty and inequality were driving forces of many forms of modern slavery. 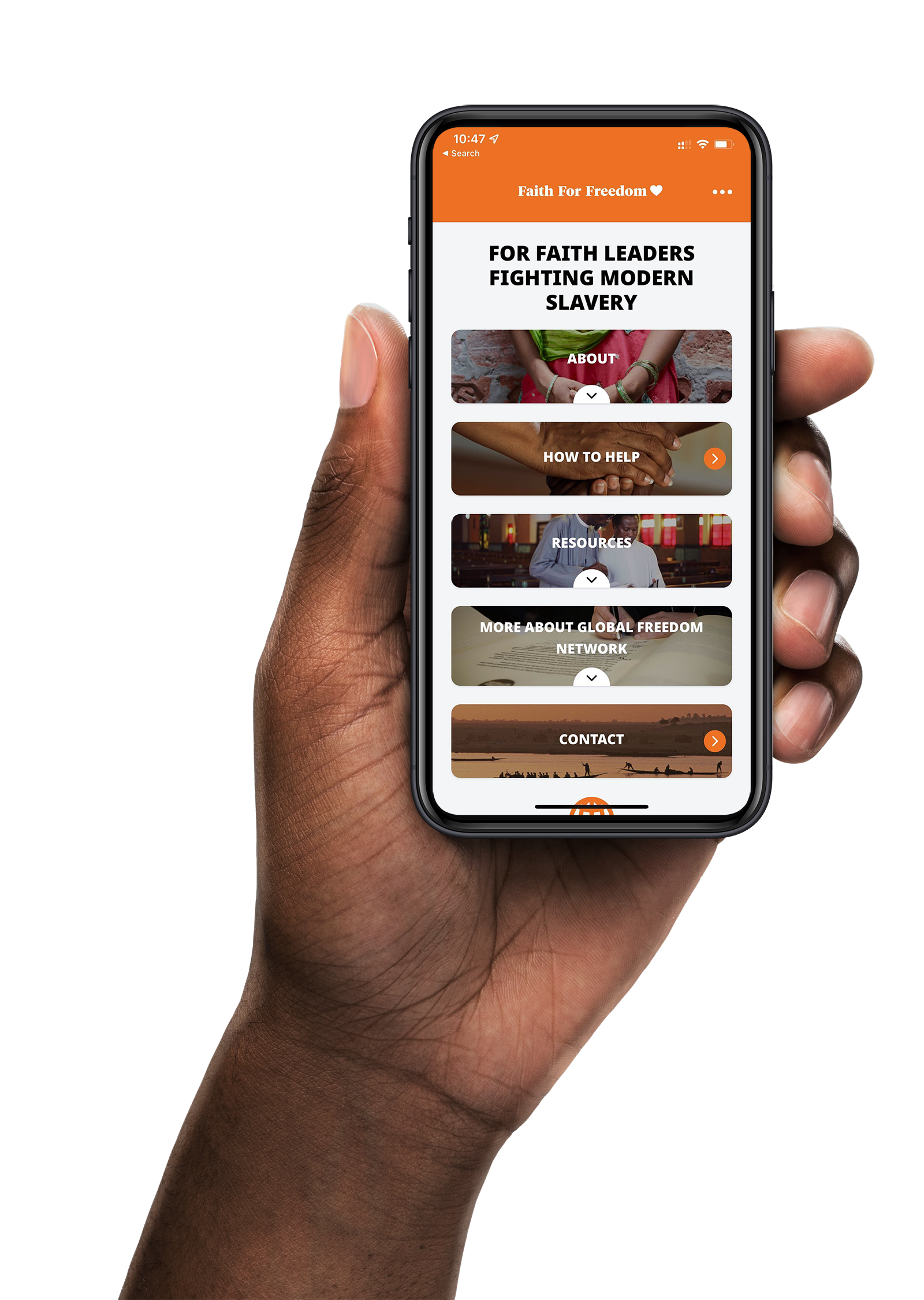 Produced by the Global Freedom Network, this free app provides clear, concise information about the crimes of modern slavery.

It explains what modern slavery is, how to detect it, how to respond to people affected by it, and how and where to find help to address it. The app has country-specific information as well as an international mode.

The app was developed in collaboration with advisory panels of faith leaders. We recognise that faith leaders see into the hearts of their communities and can play a vital role in protecting their congregations from harm.

What is the Federation of Faith Leaders?

GFN believes passionately that in the interconnected but unequal world we live in, faith leaders can play a crucial role in supporting governments and societies navigate the most complex problems that the 21st century throws at us.

We decided after meeting with faith leaders in Ghana that we needed a single platform so that faith leaders can share best practices and collaborate on work they do within their countries.

Signatories to the Joint Declaration of Religious Leaders Against Modern Slavery may join this international group of faith leaders so they may build a community of ethical leadership in the fight against modern slavery.

Faith leaders in Ghana have already cooperated on several initiatives and plan to continue their valuable work together:

How we can help you

Global Freedom Network and our partners create assets and resources that help faith leaders, their teams and faith-based organisations understand modern slavery and empower them to take action in their communities. Explore our library of resources and see our work in action.